All Roads Lead to Dublin on the 16th September. 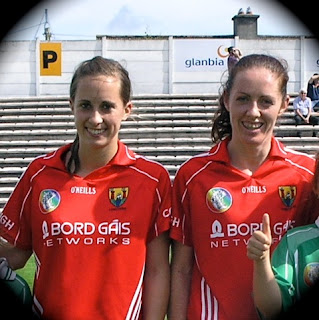 Ballincollig Camogie Club are off to Dublin for the All Ireland Final
to support a Cork team that contains two of our senior players, Linda
Dorgan and Leah Weste . Coaches' cars, trains are all heading north
carrying the Ballincollig army of supporters to cheer the girls on
Sunday 16th. They aren't the only girls from Ballincollig playing in
Dublin that day. Our U10's and U12's will be playing friendly matches
against Faugh's Celtic Camogie Club in Templeogue. These girls have
been travelling all summer from Ballinhassig to Kilkenny, west to
Killarney and now to Dublin. They will go anywhere for a game of
Camogie and a good day out. Of course this trip is extra special and
we hope that Linda and Leah will bring back the O'Duffy cup to round
off what has been a very busy but wonderful summer of Camogie for
everyone in the clubs under age section. Watch out for match reports
in next week's newsletter.
Training will continue for those not travelling to Dublin, text will
be sent if there is any change.
Posted by Ballincollig Camogie Club at 21:12

Under 9/10 would like to congratulate their trainer Jess Hennigan on
winning her first Munster medal with cork. This junior team took on
Tip in what was a cracker of a game, Jess scored 6 lovely points, she
did her county and club pound, well done Jess!
Posted by Ballincollig Camogie Club at 21:11

Under Age Gets Going!

It was great to see all the girls return to our Sunday training
sessions last weekend. It was a beautiful warm morning and lots of
girls could be seen practicing their skills in the GAA grounds. Girls
between the ages of 7 and 13 were striking, blocking, hooking, and
soloing. Most importantly all the girls were having fun. The large
number of girls playing really is a sight to behold. This busy hive of
activity all bodes well for our club. There was a lot of talent on
display. If you'd like your daughter to join our underage Camogie Club
feel free to come down any Sunday morning from 12.15 to 13.15.
Posted by Ballincollig Camogie Club at 21:03

U10 Blitz in Ballinhassig

Last Saturday our U10 team travelled to Ballinhassig to take part in
the annual Donal Crowley Blitz. This is one of the highlights in the
U10 calendar and as usual everyone had a great day. Our first game was
against Eire Og. The girls really hit the ground running in this game.
We saw Sophie O'Sullivan, Zara Foley and Nicole Kirstein getting goals
in a very tight match. Miriam Healy was her usual solid self in
defence and Amy Murphy worked tirelessly in midfield supporting both
forwards and backs at all times. Our next game was against the hosts
Ballinhassig. This was a really tight affair as both teams were evenly
matched. It was Eanna O'Connell up front that made the difference in
this game. Allana O'Sullivan and Claire Murphy played their part in
setting Eanna up for the only goal of the game, while at the other end
Kate O'Sullivan kept the Ballinhassig goal attempts out with a
coolness that you'd normally see int he Arctic Circle. Our final group
match was against Barryroe and our forwards really got rocking and
rolling in this game. Zara and Nicole were on the score sheet again
with Abbie O'Sullivan and Amy O'Rourke, Ellie Ronayne got two and Anna
Cremin Butler scored from half way. A fantastic way to round off the
group stages.

We went onto play our neighbours Eire Og for the second time on the
day in the Semi final. This was a great semi final with both teams
giving their all in a great display of camogie enjoyed by what was now
a very large crowd. Captain for the day Caoimhe Creedon led by example
for the whole game giving her all. Lauren Buckley despite being tired
pushed hard up front along with all her team mates to try to get an
equalizer but alas it was not to be. Eire Og went through and went on
to win the final. Our girls and mentors were disappointed but not for
long. The chips and sausages brought their smiles back and it meant we
left Ballinhassig with more fond memories of another great day out.

The mentors Mossie, Eileen Denis and Michael and all the supporters on
the day had a great day thanks to these wonderful girls. Well done to
you all. Everyone involved, players, mentors, parents and supporters
want to also say a big thank you to Jess Hennigan for being our club
ref on the day. We would like to congratulate her on winning a Munster
Junior medal the next day playing for Cork against Tipperary.
Posted by Ballincollig Camogie Club at 21:02

Very tough challenge game last Saturday we now know how high the
standard is so girls training is vital championship and league quarter
final put back so we have time to get things rite, best of luck to our
exam girls don't enjoy yourselves too much on Wednesday.
Posted by Ballincollig Camogie Club at 21:02

The girls again this year due to results were in a 3 way play off and
will again play Ballygarvan in Ballincollig on
MONDAY 3rd SEPTEMBER to see who will progress to the County Semi Final
on Sunday 9th September against Sliabh Rua.
The girls have put in tremendous preparations of hard work, attendance
at training and challenge matches, and the mentors had difficulity in
picking the starting 15 due to the efforts by each and every player;
and over the past two matches we have introduced players and all girls
are prepared and ready to play and play as a unit with one goal - a
place in the County Semi Finals.... the gloves are now off and only 1
team will survive and progress........... Match report next week.
As a Club we are very lucky to have the excellent Down Family of Downs
Supervalu, Main Street, Ballincollig as Club Sponsor - and like in
previous years the family get behind the Camogie Club and this year it
was the turn of the Junior Team to receive new gear....... the Junior
gear in use presently was handed down from the present senior team and
after 9 years it was time for its retirement..... The new gear fully
sponsored by the Down Family was presented at the GAA Grounds on
Friday 24th August and was accepted by Junior Club Captain, Louise
Weste. On hand at the presentation were Barry Down and Captain Louise
Weste....... Barry was invited into the Club to a reception and Club
Chairman, Finbarr Bradley, and captain, Louise Weste both thanked the
Down Family for their continued support; there was a great attendance
of the Club Officers, committee and players and a lovely evening was
had by all.... Once again a huge thanks for the gear and we hope to do
you proud....
Photo taken of Barry Down and Louise Weste at the Score Board also
sponsored by the Down Family for the Ballincollig GAA Club.
Posted by Ballincollig Camogie Club at 21:01

With a busy schedule we are finding it difficult to pin down a date to
play Cloughduv in the Minor match but we hope to have news of the
match in the coming days..... watch for the tx and be
ready............ not much time to prepare but this small talented
group will give their all against neighbours Cloughduv....
Posted by Ballincollig Camogie Club at 21:01