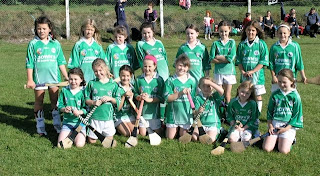 With the lazy days of the summer holidays behind us it was back to action for our busy U8 squad. Our first outing of the summer was an invitation to take part in a blitz in Inniscarra. Never afraid of a challenge and with the prospect of loads of fun we headed off to Ballyanley. Our first match was against Eire Og. No cobwebs with these ladies I can tell you, straight into action and with a bit of luck we could have been three up at half time with Sophie, Erika and Abbie going close on a number of occasions. It was a tight game with defences on top. Our defence of Anna, Miriam and Megan marshalled the Eire Og forwards very well and Amy Murphy in goal made one particularly good save that ensured it was nil all at half  time. Caoimhe, Eabha and Aoife worked very hard in a tight midfield battle.  Into the second half and again it was tight with eventual blitz winners Eire Og getting a late goal to win the match 1 - 0.

The usual positional and tactical changes meant we had a different team playing in our second game The game itself can only be described as a classic ! A more open attacking game ensued between two totally committed sides.  Abbie in goal, Amy Murphy, Caoimhe and Sophie were  all busy in defence, Anna, Amy Browne and Nic were up and down the pitch in this end to end game.  Up front  Becky, Erika and Megan were peppering the Inniscarra goal. Anna was firing in goals from half way while Miriam tirelessly connected play between our busy midfielders and the hot shot forwards. We went in at half time down 5 goals to 2. Believe me when I say these girls are a bunch of fighters who never give up. In the second half Nicole up front forced a couple in and next thing you know we were level 5-5, despite going behind again the girls fought back with goals from Miriam, Anna and Megan. At the other end Shannon was a busy girl in goal. in the end Inniscarra won 10-9 (as I said a classic) but the girls deserved better after their spirited performance, we were all so proud of you. It had to be the game of the tournament. After that we all took a deserved break for lunch at the cake & book sale. Some of the girls went shopping for books and picked up some great bargains.

After the break it was onto our third match against Blarney.  Despite the efforts in the last titanic struggle the girls pulled out all the stops for this one. Sophie went in goal at the start of this one and kept a clean sheet.  Of course she couldn't do it with out her strong defence of Eabha, Abbie and Becky. Anna, Amy Browne and Miriam in midfield drove the team on again, this trio popped in a couple of goals from half way. Nic played well connecting midfield and the two full forwards Shannon and Shauna. Shauna got two in the second half and Nic also scored a deserved goal. Goal of the game came from Amy Murphy who pucked the ball the length of the pitch, one bounce and into the back of the net. Amy is surely one to watch in the puc fada at Xmas. It was a great way to finish the blitz as we won our final game 7-1.  As usual all the girls, parents and mentors had a great day out, with everyone being proud of each girls effort on the day. Some people headed off to rest weary limbs while the rest of us went to support our U10 team in the final of their blitz against Aghabullogue.  Unfortunately they didn't lift the cup but they also did the club proud on the day. Well done to you all.

Our next game will be against Ballinora on Saturday 18th Sept. We are hoping to arrange a match for the Saturday after 25th September.  There will be no training on Sunday 19th and 26th Sept.  We will keep you all posted via text about times and venues of the matches.

Posted by Ballincollig Camogie Club at 09:21