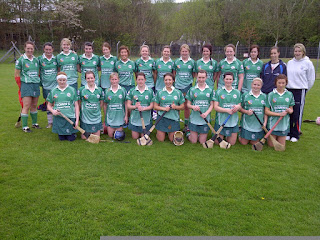 Very sadly we bowed out of the championship last Sunday when we were defeated by Ballygarvan on a 0-11 to 0-09 score line. We played with a strong breeze in the first half but struggled to dominate our opponents and went into half time only two points in front. We kept ahead for most of the second half and at one stage went four points up, but Ballygarvan went in front with a few minutes remaining and we were not able to rescue the match. While we have not achieved our goal this year, we hope that lessons have been learned and that we will come back stronger in 2012 to have a more successful tilt at the championship.

Can I thank all the players for their commitment this year, You are a fantastic group to have worked with and hopefully next year will bring the success that you deserve. Secondly a sincere "Thank You" to our own club for the un-wavering support throughout the season. Finally it was wonderful to see so many Ballincollig people in Mahon last Sunday supporting your team to the bitter end. We are sorry that we could not match your enthusiastic support by coming away with the win that everyone so badly wanted.

Posted by Ballincollig Camogie Club at 15:01