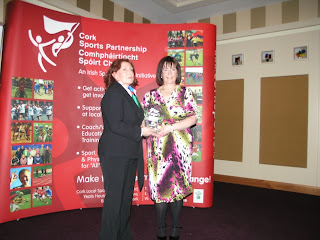 Mairead Donovan was recently awarded Club Volunteer for 2011 by the
Cork Sports Partnership. She was presented with her prize by Minister
of State Kathleen Lynch T.D. at an awards ceremony recently in Oriel
House.

This is what was said about her contribution to Camogie so far.

Mairead has been involved in the Ballincollig Camogie Club since it's
inception in 1974. She has excelled as a player, trainer and officer
for the club for the past 37 years. She recently stepped down as
Chairman of the club and currently trains the clubs U18 and Junior
teams She has played in the club first Under age team and
subsequently in the clubs first adult team. She has also acted as
treasurer & PRO. In her most recent officership as Chairman over the
last 4 years, she has guided the club through a huge growth curve. The
club has seen a doubling in size of players mentors and members. The
club has grown from being a junior club with approximately 4 under age
teams to a successful senior club with at least twelve active teams.
In her time as chairman the club achieved success winning Junior A,
and Senior B county titles in successive years. A measure of her
dedication at club level is the fact that she is now training
daughters of girls she had trained a generation before.

Maireads contributions to Camogie both at club and county level are
full of passion, commitment and dedication.

She has been involved in the Cork Juvenile and senior Camogie Boards,
at a number of levels, She is passionate about spreading the game to
all corners of the county through her involvement in the Juvenile
County Board. Her work at County level has been never ending, Always
volunteering for fundraising, gate collections at matches, and
supporting various county teams at all levels. Her most recent
position being Cork Development Officer in the under age section.
She was appointed as Development officer in 2011 to install the GO
Games ethos in under age Camogie throughout the county. This involved
organising a structured programme of games for 70 clubs at under
8,9,10 and 12 age groups. As well as organising the games for girls,
she organised refereeing courses for young girls to learn how to
referee the GO Games played through out the summer

Mairead was also instrumental in helping set up new under age Camogie
clubs in Aghada, Doneraile and Crosshaven. She arranged start up
equipment, funding and education courses for the mentors in these new
clubs.The impact Mairead has had on under age Camogie throughout the
County in the last number of years was plain to see when a number of
blitzes were held at the County head quarters in Castle Road where
close to 1000 girls took part.

Mairead shows total commitment to her sport, her club and county.
While providing joy for all people involved, success seems to follow
Mairead in many different ways. She is always there for people, no
matter what the issue is there is always an answer for you. Her
dedication and will seem to be never ending to get young girls
involved in the sport she loves providing them with a platform to
achieve their own personal, club and county goals. All this work is
done with a genuine love of the game and an enduring wish that all the
girls, parents and trainers who take part enjoy themselves, make
friends and learn about the game of Camogie

Posted by Ballincollig Camogie Club at 09:37