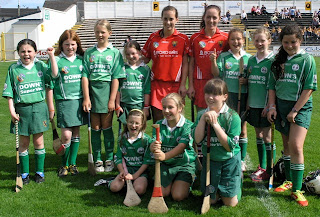 Two weeks ago this group were in Killarney playing teams from Kerry
and this past week they were in Kilkenny playing a team from Galway.
Cork were playing Galway in the Semi Final of the senior All Ireland
and Ballincollig were invited to represent Cork at half time in an U10
go games match. It was a great honour for the club to be asked and
fitting also as we had two players from the Ballincollig senior team
involved in the Cork squad. The U10 girls as well as the senior
players Linda Dorgan and Leah Weste did the green and white of
Ballincollig proud on a beautiful day in Nolan Park. The bus journey
up to Kilkenny seemed to fly by really quickly and we actually arrived
earlier than the Cork team coach. The U10 team went for a little puck
around on the Nolan Park pitch to loosen out the limbs after the bus
journey up. Then it was a case of team pictures on the pitch before
checking out the programme which included their own team list. The
girls met Marty Morrisey and got pictures taken with him too. They all
enjoyed watching the first half of the Cork Galway game and then it
was the girls moment to shine. And shine they did, it was a very short
game so the girls gave it everything. Nobody was over awed about
playing in front of such a large crowd and the reception that all four
U10 teams received at the end of their game brought a huge smile to
all the girls already beaming faces. We then settled down to watch the
exciting second half of the Cork Galway game. Cork deservedly won and
are now through to the All Ireland Final in September. The
Ballincollig girls formed a guard of honour for the Wexford team as
they came out for the second semi final V's Offaly. Then there was
more photos, this time with Linda and Leah so we now have a record of
the day all twelve Ballincollig girls played at the All ireland semi
final. We watched some of the second game before we hopped onto the
bus for home, but before we got on the bus the girls were delighted to
have the opportunity to meet the Cork team and to get autographs on
hurleys, helmets and programmes. We stopped for our tea in Cahir and
continued on our merry way home. The bus pulled into the club right on
schedule. We couldn't have planned the day to have been any better. Of
course we must thank all the people that helped on the day and before
hand to make the whole experience go as well as it did. Thanks to
Michelle for organising the flags, thanks to Sean, Denis and Jess for
looking after the team on the day. Thanks to Erika for providing the
markers for the autographs. We must also thank Niamh and Debbie who
looked after the girls through out the day. Thanks to Leah and Linda
for spending a bit of time with the girls for photos after their
momentous effort to get to the All Ireland Final. We wish you and all
the Cork team the very best in Croke Park. Last but not least we have
to complement the U10 girls who represented the club in such a
wonderful manner both on and off the pitch You were all a credit to
the club, your families and yourselves. Well done to you all and
hopefully in a few years time we'll be going to support some of you in
Nolan park in the red and white of Cork.
Posted by Ballincollig Camogie Club at 20:46